Ted spent many years working for Sperry developing and patenting instrumentation that changed the world of aviation. His brother, David Kenyon, also worked for Sperry for 36 years, his genius was the electrical aspect of any given project. David also had numerous patents attributed to him during his lifetime.In the 1940's, during WWII, Ted and Teddy both worked for Grumman, Teddy test flew the Navy Hellcats and TBF Avengers off the production line and Ted demonstrated the autopilot that he had patented with Sperry at bases around the country. It was estimated that Teddy had about 4000 takeoffs and landings by the end of the war.
In 1946, Ted decided to start up another business by the name of Kenyon Industries, it was reorganized in 1948 as Kenyon Gyroscope & Electronics Corp. in New York. The nature of the business was gyroscopic and other instruments for marine and aircraft use. 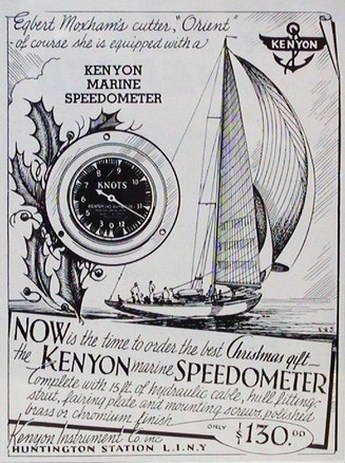 Kenyon Boat Speedometer Ad
Ted was also an avid sailor and while on his boat "Sea Spray" he found that trying to identify the buoy markers with his binoculars while on a pitching ship was quite difficult at times. So why not apply the gyroscopic principle and come up with an easily attachable system to use on a pair of binoculars? He soon realized what an advantage this device would be for aerial photographers as well. In April of 1950, he filed his patent for the Gyrostabilized Sighting Instrument for use with hand held instruments such as binoculars, sextants,cameras and the like. Not long after, Ted and Teddy moved to Lyme, Connecticut, and in 1953, Kenyon Laboratories, Inc. was born. The business continued to build marine and aircraft instruments and control equipment. At the same time he began another company by the name of Gyrostabilizer Corp. In 1957, Ted was granted a new patent on his improved gyrostabilizer design. Around 1958, Ted decided to move the company out of his home and designed and had a place built at the Chester Airport in Chester, Connecticut. The building was the perfect location, they could park their plane directly in front of the building! Ted was able to get a few investors lined up by offering stock options in the company and assemble a good team of employees, the most important was Henry Struck, his design engineer. 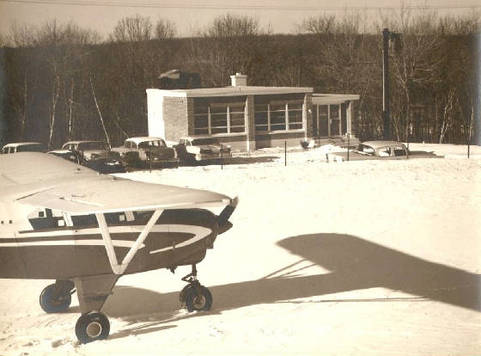 Ken Lab at Chester, Ct. Airport Around 1960
Henry Struck, as a 16 year old freshman, studied in the aero engineering field at CCNY Engineering School. He never did finish his studies, he found it hard to fit in due to his being much younger than the other students. Nevertheless, he became legendary as a model airplane designer, builder and contest flyer. He held many records and was well known for his innovative designs and his perfectionist nature in flight adjustment. He was known to keep his hair a particular length....short, so he could feel the thermals tickle the back of his neck. Henry would clap his hands in childlike delight when one of his models would fly so far as to never be seen again. He would put his name and address on his models and occasionally, perhaps a boy would find one in a tree and it would come back to Henry....via the mail. Henry was a humble flyer who always had a look of amazement every time he won, never believing he was a master. Henry was often invited to lecture on his designs. One particular occasion, he stood behind the podium and displayed a paper covered clothes hanger to the audience. He deftly bent the wire into shape and launched it out into the audience. It flew flawlessly around the room and landed perfectly at his feet. The crowd roared with approval. Henry was always amazed that he was amazing.He was honored in the Hall of Fame of the AMA, National Free Flight Society and the Society of Antique Modelers. In 1941, he was Grand Champion at the Chicago Nationals. Henry set the record for free flying gas powered models in 1950. This model as well as one of his Berkeley model designs is included in the Smithsonian Air & Space Museum collection. Fifty Struck designs were published and 45 were produced as kits.

In February of 1964, a distressing letter arrived for T.W. Kenyon, Inc., it was from a firm of lawyers who represented the company of Kenyon Instruments Co. requesting assurance that Ted would promptly discontinue the use of the word Kenyon in any name, product or trademark. This was the very same company Ted started in New York in 1937. With disbelief, Ted began a year long battle to try to retain the right to use his own name.What seems to have transpired was that Kenyon Instrument  (which was then bought out by Flexible Tubing Corp.) was building inferior speedometers and many people had asked Ted if he could get the company to do a better job, but he got nowhere with them. Ted decided that he would bring out a new, improved and thoroughly modern speedometer which had been tested for a good year and a half on his own boat. He began marketing it early in 1963 and at his lawyers suggestion, the new instrument was called "Kenlog" and was manufactured by T.W. Kenyon, Inc.
Flexible Tubing Corp. sent up representatives and afterwards made a feeble attempt to buy his new speedometer, but they would not pay anywhere near what Ted thought it was worth. They had been working on a new speedometer for some time, but had not got one on the market yet, although they were advertising heavily. Ted realized that they undoubtedly resented his coming into the picture and were going to make it as difficult as possible.Back and forth the arguement relented. Neither side wanted to give in. By October, Ted had enough and decided to change the name of the company to Ken-Lab, Inc. and all marine products would be known as KENLOG, KENMILE, KENKNOT, KENSTEER,  etc. He tried to keep the Kenyon name for the gyros, but Flexible Tubing even argued that it was known that gyros were attached to binoculars and used on boats. 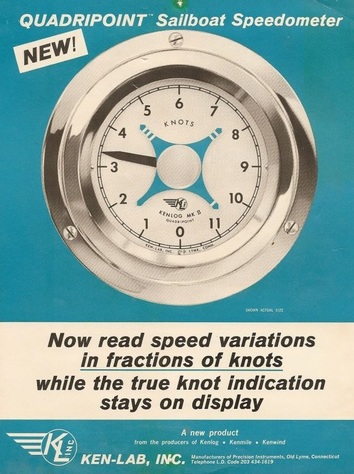 By April of 1965, a settlement was finally agreed upon. T.W. Kenyon was dissolved. Ted would be able to market the gyros as Kenyon Stabilizers and could not refer to them as instruments or be marketed with name Kenyon to anyone concerned with marine applications. Ken-Lab, Inc. was accepted as the name of the company, but no marine products could be sold using the word Kenyon in any way. Finally Ted could move on and concentrate on his business. He did get the last laugh by selling the speedometer patent to Danforth in Maine for a sizeable amount of money! Ted soon decided to begin another business by the name Square Circle, Inc. to build the gyro stabilizers. He was favored by two large orders from the Navy for over 200 gyros. Chiefly, as a result of the Vietnam requirements, increased evidence of need for a stabilized optical viewing device was apparent. By this time, gyro stabilizers had been bought by Hamilton Standard, Bureau of Standards, Atomic Energy Commision, the U.S. Army, Marine Corps and Air Force.

Throughout Ted and Teddy's lives, they associated with so many interesting and well known people. One favorite story is that of how every year, Ted would get together with two good friends and sail out to Block Isalnd for a getaway. Those friends were L. Francis Herreshoff, son of Nathanael Herreshoff, both well known wooden boat designers, and the one and only Albert Einstein. They would stay up for days in drunken abandon discussing their ideas and problems with the projects they were working on at the time. Ted and L. Francis would take great delight in sailing around the island and then let Einstein attempt to sail the boat back to the mooring. He would always fail miserably and they found that incredibly amusing.        Years went by with normal ups and downs. Ted became ill yet continued to work and putter on his projects. He passed away in 1978 and the business then became Teddy's. She had always been involved with the business, so she naturally was the one to carry it on with the help of Henry and Karl Jonason, the machine shop supervisor. Unfortunately, Karl had decided it was time to retire at the same time, this would have left Henry on his own to do everything.
Machining was not Henry's favorite task, he preferred the assembly process of the gyros. But Henry had been having a bad reaction to the epoxy that is used to glue the gyros together, so he needed help. Henry's daughter, Christine, had been involved with a talented young man by the name of Ron Denman, a highly sought after wooden boatbuilder. Ron offered his help at night after he got out of work at the marina and glued the gyros for Henry.

Ron never did get to meet Ted, but he did develop a quick understanding of how the gyros worked and how they were made. With the departure of Karl, and his refusal to train anyone, the company desperately needed someone to help with the machining. Ron had to make the difficult decision to devote most of his time to Ken Lab and began to teach himself how to run the machines necessary to build the gyros. This required learning how to use the bridgeport milling machine, the lathes and all the other tool room equipment. He never worked less than 60-80 hours a week and soon he had less and less time for his first love, boatbuilding and operating the crane at the marina.

Building a gyro back then was a long tedious process. The frames were rough sand castings that needed to be machined so they were usable. The tungsten used for the wheels were also rough misshapen blobs that needed to be turned into precision wheels.  Tungsten is hard and gnarly to machine, so it was time consuming. Of the hundreds of parts needed to build one gyro, only a small percentage were made outside such as the bearings, motor laminations, screws and electrical components. Everything else was made in house and required jigs and fixtures to be made for every part. Despite the seemingly primitive machinery back then, each gyro was made to precision accuracy. We still see them come in to be checked out and if taken care of, they still run perfectly.
Ron became very close to Teddy and Henry as the years went by. When Teddy passed away in 1985, the business went to Henry. Ron continued to assist Henry in all aspects of the business. Henry was Ron's mentor and as Henry's health began to fail, Ron made sure Henry was always involved in some way. When Henry could no longer drive, Ron would bring him to work and make sure he had something to do.
The business always experienced ups and downs, but the world was changing, Ken-Lab could no longer depend on military contracts and Ron had to find more ways of reaching out to potential customers. Remember, these were the days before the internet and cell phones were available. He got on the phone and called up anyone who might remotely benefit from something called a gyro stabilizer.  He mailed out information worldwide to anyone interested and relied on advertising in photography magazines, which all was expensive. He did all he could to spark interest in this mysterious product, believing it had great potential to change the photography world as well as the movie industry.
Today, Ron still works hard to continue what Ted and Henry started. With the addition of CNC machining abilities here at Ken Lab, he is able to constantly improve the precision and accuracy needed to make a gyro work properly. All of us here take great pride in the quality of our product as well as our customer service.